“By helping local communities develop precise maps of lead line locations, we’re another step closer to ridding the entire state of these toxic pipes,” said Governor DeWine. “Addressing lead service lines is not only a key goal under our H2Ohio water quality initiative, it is an important component to our commitment to the health and well-being of our communities.”

Governor DeWine initially launched this H2Ohio grant program with $1.4 million in March but increased the total award amount to $2.1 million in response to high demand for lead line identification and mapping assistance.

“Awarding these grants today is a great way to end Drinking Water Week, which recognizes the vital role water plays in our daily lives and the importance of safe, clean water and lead-free pipes,” said Ohio EPA Director Laurie A. Stevenson.

The 48 lead pipe mapping projects will take place in communities in 31 counties. All applicants are receiving their full funding request of up to $50,000. 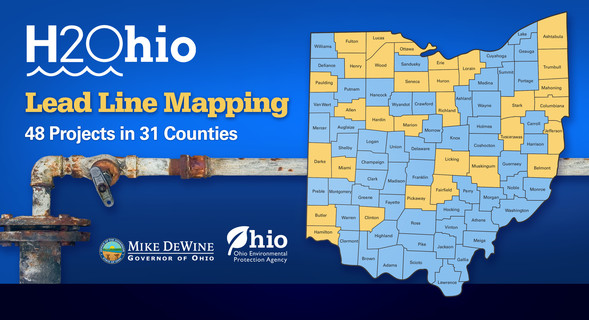 Lead-based paint and its dust are the most common source of lead poisoning, but lead in drinking water can significantly increase a person’s total lead exposure. While lead poisoning can affect individuals of all ages, children are at greatest risk. Children’s bodies absorb lead more efficiently than adults, and they are less able than adults to detoxify their bodies of lead.

Since taking office in 2019, Governor DeWine has been an unwavering leader in his work to address the consequences of lead poisoning and to increase lead abatement. Working with the legislature, he expanded early intervention services to include children with elevated blood lead levels. He also formed a Lead Advisory Committee to help lead the state’s efforts to abate and remediate lead contamination and offered more than $44 million in grants for the identification and elimination of lead paint in Ohio homes.

Other lead-related actions include lead abatements to low-income and middle-class families who own contaminated homes; the creation of a repayment program for abatement workers and contractors who earn licenses; strengthened enforcement of lead hazard control orders; and a public awareness campaign for the new Lead-Safe Housing Registry.